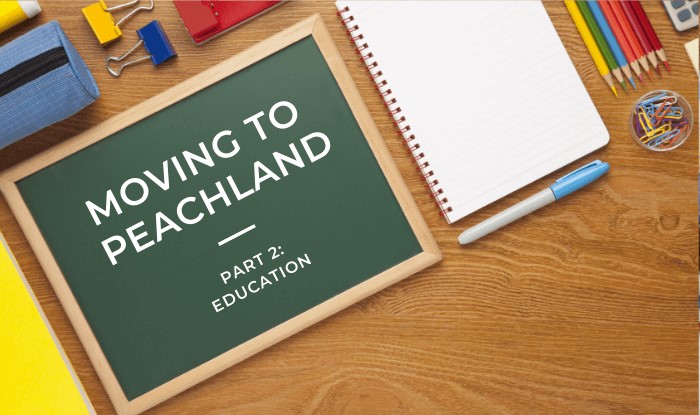 "Where will my child go to school?" is a common question that arises when considering a move to a new location. Access to schools, libraries and other educational amenities is important for your child's well-being and future success. Or, perhaps you or someone in your household is interested in attending post secondary school or a trade school in the future to further enhance an existing career or to change careers altogether. Whatever the case may be, it is helpful to know what's available in the area before moving; therefore, Part 2 of our Moving to Peachland Series will cover educational amenities and programming in and near Peachland.

There is one school within the District of Peachland, Peachland Elementary, that serves approximately 400 students grades K-6. According to the school's principal, Ross Hett, "the school's learning culture is centered in kindness, where each child is supported in their learning journeys by a caring and dedicated team of teachers and support staff."

Peachland Elementary is located just off of Highway 97 behind the Peachland Village Mall at 5486 Clements Crescent. In 2018, the school received provincial funding to build a new playground, which opened for student use in September of 2018. Parents and guardians of students attending Peachland Elementary are invited to attend Peachland's Parent Advisory Council (PAC) meetings, which typically take place on the second Tuesday of each month during the school year. School bus transportation is available for a fee through the school district.

For students ages 3 to 5, the Okanagan Boys and Girls Club (OBGC) in Peachland operates a preschool program at Peachland Elementary. OBGC also facilitates an after school club for students ages 6 to 12. The program runs at the Historic Primary School building (5684 Beach Avenue) from 2:30-6:30pm and engages students in activities to enhance skills in the arts, sports, and personal growth. Drop-ins for youth, Parent's Nights Out and other recreational programs are available through OBGC.

Peachland has a small public library located in the Peachland Village Mall at #40 - 5500 Clements Crescent. The library provides access to books (digital and hard copy) as well as visual and audio media available throughout the Okanagan Regional Library system. The library hosts events for all ages to engage the public including children's story time, Summer Reading Club, an adult book club, and more.

As there are no middle or secondary schools in Peachland, students must travel to West Kelowna to attend public school (typically about a 15-minute drive). Students grades 7 through 9 attend school at Glenrosa Middle School, located at 2974 Glen Abbey Place in West Kelowna. Glenrosa Middle was established in 1994 and now serves nearly 500 students. The school relationship with Daiichi University Haruhigaoka Junior High School, a sister school in Japan, through which the schools facilitate a cultural exchange program for students and staff.

It is possible for students to attend a school outside the catchment area; see the SD #23 website for the following information:

A French immersion program is available through SD #23; students must enter the program in Kindergarten or grade 1.

The following private schools are also in the area:

There are two major post-secondary institutions in the area: the University of British Columbia's (UBC) Okanagan campus and Okanagan College, both of which are located in Kelowna, about a 30 minute drive from Peachland. UBC's Okanagan campus, located at 3333 University Way in Kelowna, serves almost 10,000 undergraduate and graduate students, offering 62 undergraduate programs and 19 graduate (Masters and PhD) programs.

There are also a number of trade schools in the area, some of which include:

To view other posts in the Moving to Peachland Series, click here.

If you're considering Peachland for your next home, click here to view Peachland's latest listings and search for Peachland homes, and sign up to receive alerts as soon as Peachland properties come on the market. If you're ready to take the next step in your home search, we'd love to be part of your journey - contact Jeff Creamer by filling out this form, by emailing jeff@shopkelownahomes.com or calling 250-575-7112.

*Have we missed something with regard to Peachland's education amenities? Please let us know!