5 Reasons 'Techies' are Moving to Kelowna (with Housing Options)

Although most widely known for its wine and tourism industries, the Okanagan Valley has seen a boom in its tech sector, with Kelowna at the epicentre of this boom. A recent survey by Accelerate Okanagan (AO) reveals that there are nearly 700 tech companies in the Okanagan, a 24% increase since 2013. These companies employ over 12,000 workers in the region and contribute $1.67 billion dollars to the region's economy. While Vancouver is still BC's largest technological hub, what is attracting so many 'techies' to BC's wine country? The following are some of the major reasons tech companies are moving to the Okanagan, and more specifically, moving to Kelowna.

Though there are many upsides for tech companies to move to Kelowna, one of the main challenges facing tech companies surveyed by AO is the small pool of talent available in the region. Finding skilled employees is currently a struggle across many industries; however, this is a plus for those seeking employment in the tech sector as jobs are plentiful. If you are seeking a job in the tech sector, check out AO's job board for job listings throughout the Okanagan.

If you are interested in relocating to Kelowna to work in the tech sector, we've compiled lists of housing options located close to some of Kelowna's major tech companies. These lists are current and updated every five minutes:

Housing options near The Innovation Centre

Housing options near The Centre for Arts and Technology (around which many Kelowna tech companies are located, including Csek Creative)

If you'd like to receive customized home search options as soon as they come on the market, click here to sign up; or, if you'd like to take the next step in your search for Kelowna homes, contact Jeff Creamer, licensed REALTOR® by filling out this form, by emailing jeff@shopkelownahomes.com or by phone or text at 250-575-7112. Jeff would be happy to assist more 'techies' in relocating to Kelowna. 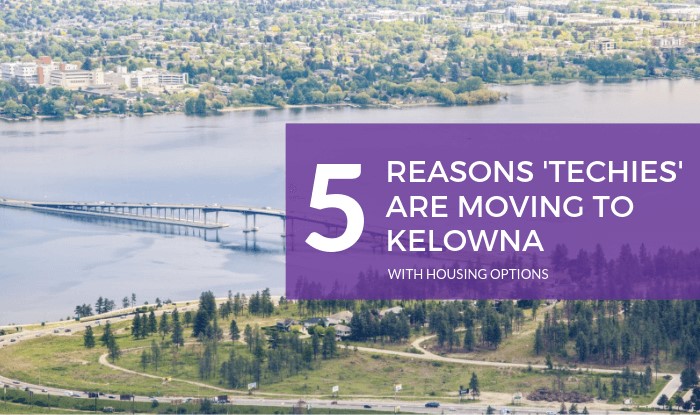