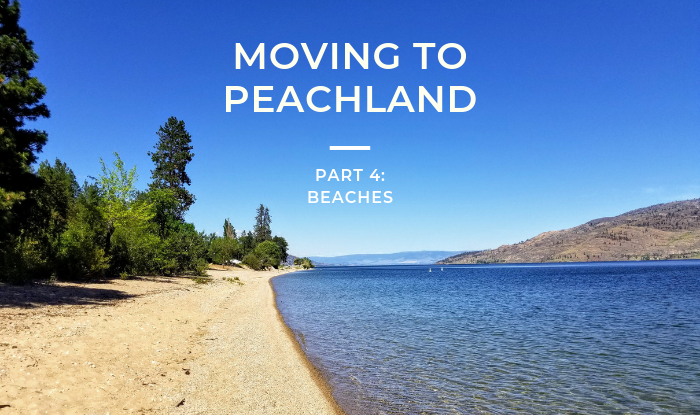 Beautiful beaches are a huge part of the allure of the Okanagan for both visitors and residents. There are over 30 beaches in the greater Kelowna area alone, and Peachland has 11KM of waterfront to enjoy, including the Okanagan Valley's only lifeguard-protected beach, Swim Bay. From swimming to paddle boarding, kayaking to boating, sandcastle-building to playing in the Wibit Water Park, Peachland's beaches provide a plethora of things to do for people of all ages and abilities, some of which can be enjoyed year-round. In part 4 of our "Moving to Peachland" series, we'll provide more details on Peachland's major beaches with hope that it will provide another piece of the puzzle in helping you decide if a move to Peachland is right for you. 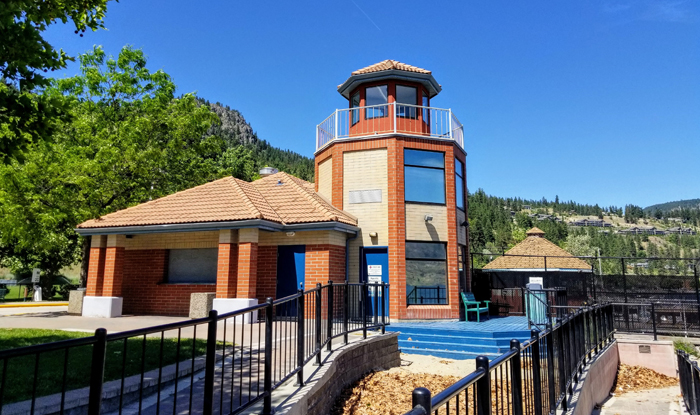 The greatest stretch of publicly-accessible waterfront in Peachland is located along Beach Avenue in Peachland's downtown core. 140 metres of Beach Avenue's waterfront near 6th Street is known as "Swim Bay," and is host to a variety of aquatic activities, including swimming, swimming lessons, a wharf with diving from two levels of diving boards, rope swinging, and ziplining. This pebble beach has a supervised area that is lifeguarded for 10 weeks during the summer, this year (2019) from late June to late August, Monday through Sunday, 12:30-6PM. Swim Bay is also unique in that it has a fully-accessible aquatic wheelchair ramp as well as an aquatic wheelchair. Furthermore, there is a concession stand that is open during the summer, and change rooms, washrooms and picnic tables are also available for public use. Click here for more information on Swim Bay, swimming lessons and the 2019 lifeguard schedule. 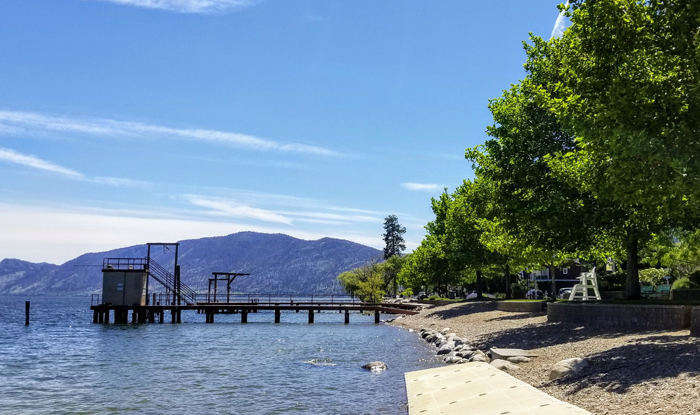 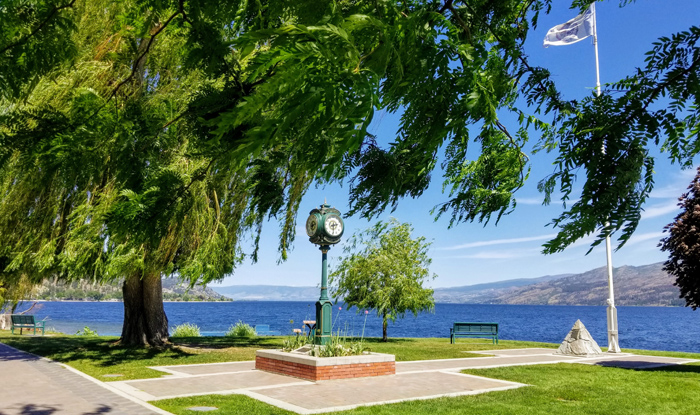 The section of waterfront along Beach Avenue between Centotaph Park and Swim Bay is a long, narrow stretch of pebble beach offering beach access, multiple docks, a picnic area and a memorial park featuring a pyramid-shaped stone statue and a four-sided historic-looking clock provided by the Rotary Club of Peachland, both commemorating the centennial of the confederation. 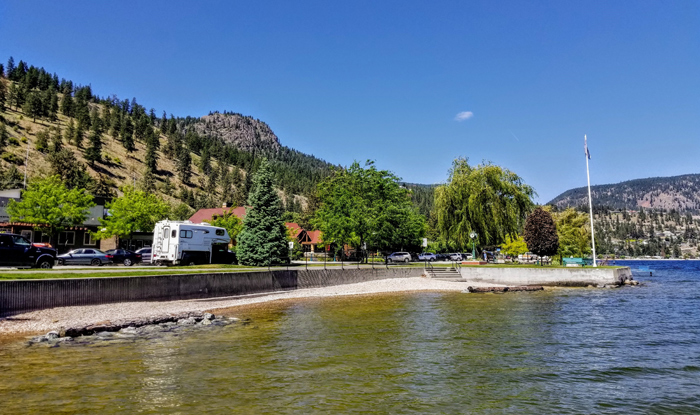 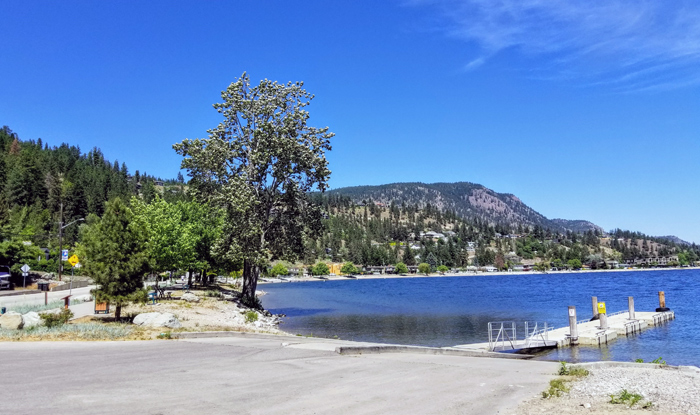 A small stretch past Swim Bay across the street from the 50 Plus Activity Centre is Strachan's Corner Doggy Beach, a pebble beach featuring a boat launch, swimming and picnic areas. Dogs are allowed off-leash in the water only; otherwise, they must remain on-leash and in designated areas. 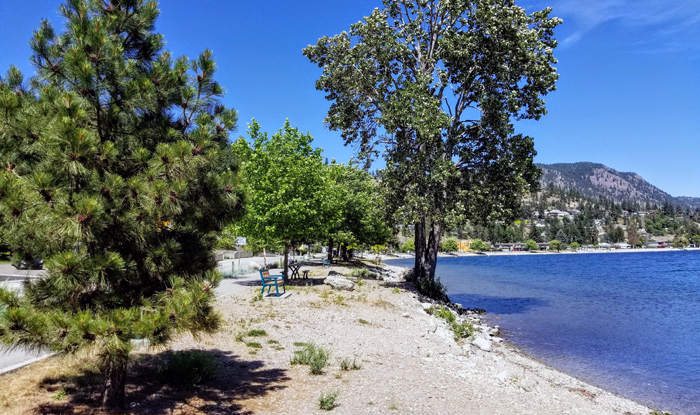 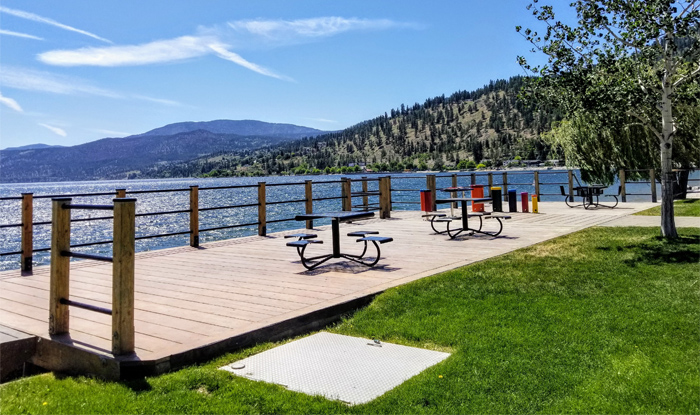 Directly across from The Gateway building on the corner of Beach Avenue and 13th Street that is home to a neat variety of retail businesses, there is a large deck providing access to the beach, which is mostly pebbles but has significant shaded, grassy areas, picnic areas, and a xylophone and bongo drums available for public use. This is also the site where Witbit Water Park can be accessed (see additional information below). The views from the 13th Street Viewpoint are simply outstanding. This beach access point doesn't have washrooms nearby or a parking lot, but there is loads of street parking available, and some nearby businesses offer their clientele washroom access. Paddle board rentals are also available here during the warmer months of the year, and there is currently a proposal pending council approval to allow for a food truck in the vicinity. 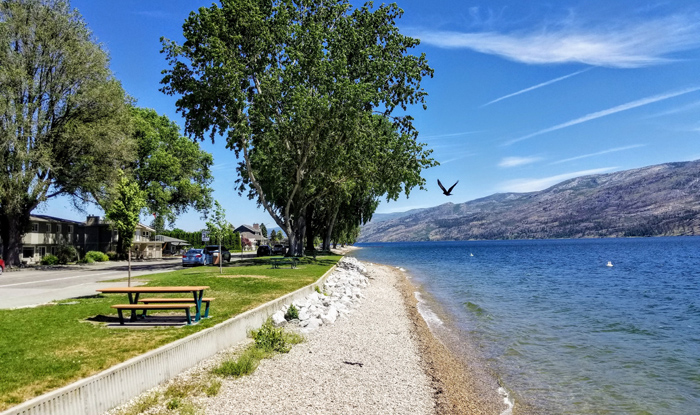 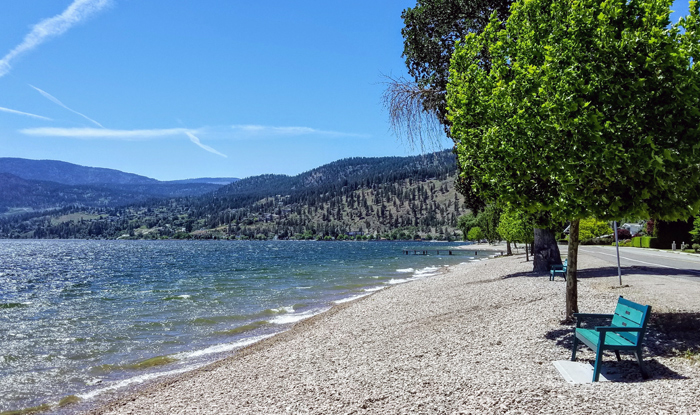 Located at a somewhat quieter, lesser traveled part of Beach Avenue at the south-east end of Trepanier Liner Park, Trepanier Bay Beach is a large pebble beach with significant sandy and grassy areas, some of which are shaded by several large trees. It encompasses Trepanier Creek where the Rubber Ducky Race is head each year. This beach offers multiple swimming areas, a boat launch, public washrooms across the street, several picnic areas, and a paved walkway along the waterfront. Lots of street parking available. 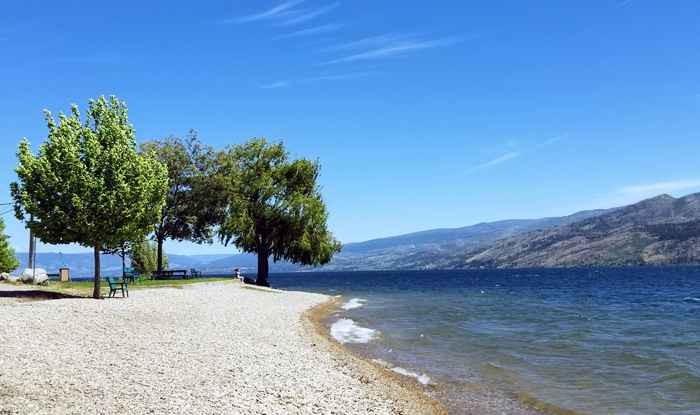 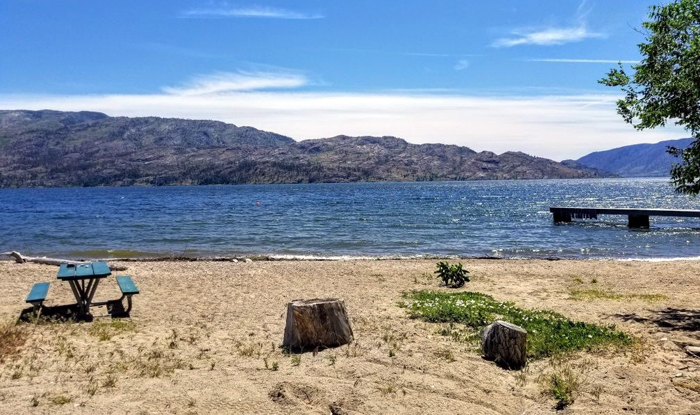 Cove Beach is a small section of publicly-accessible, sandy beach adjacent to Davis Cove Resort at the north end of Beach Avenue near Buchanan Road. It is a very basic beach area including a small area for swimming and a picnic table; there are no public washrooms or other amenities available. Cove Beach has no parking lot of its own, and there is limited street parking around it due to its location at the bottom of a large hill between two private properties. 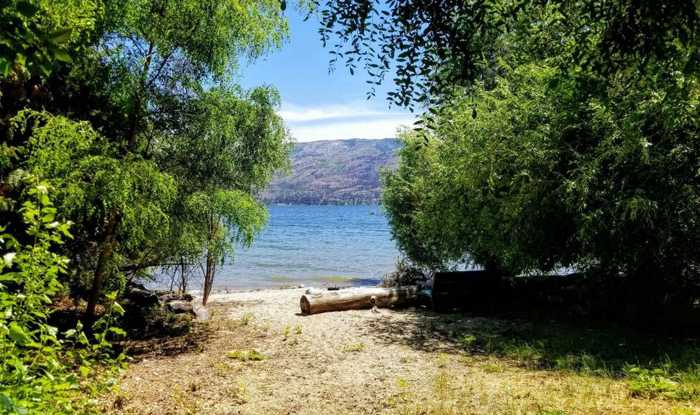 In the general vicinity of Cove Beach and adjacent to the Stonewater residential development (a private property) on Buchanan Road, is a small public park with beach access. This beach has minimal signage marking its existence, and limited parking is available on the gravel shoulder of the road. Named after local residents, the beach at Burdekin Lane is accessed by taking a long, winding, mostly-gravel path through the woods, some parts of which include stairs. Once arriving at the beach, which is sandy, quiet and secluded, you will find a small swimming area and a bench. 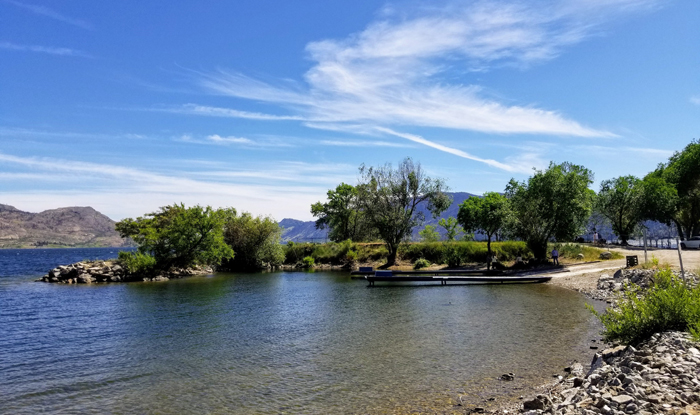 Near where Beach Avenue and Princeton Avenue intersect is a busy boat launch with a fenced off pebble beach including a swimming and picnic area. It is a great beach to freely enjoy the water with your dog as dogs are allowed both on and off-leash. It's also a popular boat launch due to its proximity to the highway and the large amount of public parking. As this beach is located at a major Peachland intersection on the highway, there is significant road noise in this area. 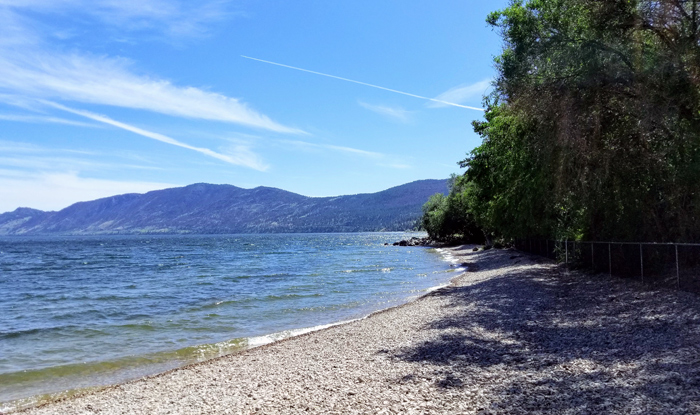 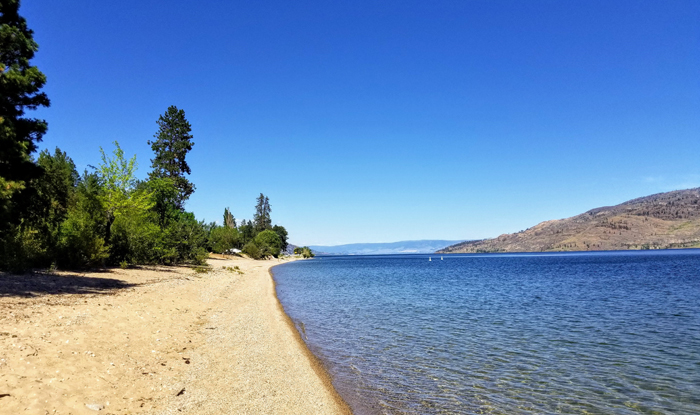 Antlers Beach is a regional park located on the south end of Peachland on Highway 97. This pebble beach with some small sandy areas boasts a swimming area, picnic area, large parking lot and a small dock for fishing or enjoying the views, which are among the best out of any beach in Peachland. As this beach is situated directly along the highway, there is a significant amount of road noise; however, the further south you go along the beach, the quieter it gets. Antler's Beach has some unique outhouse-style washrooms, and there are publicly-accessible washrooms across the highway on Hardy Street, which are part of Hardy Falls Regional Park. 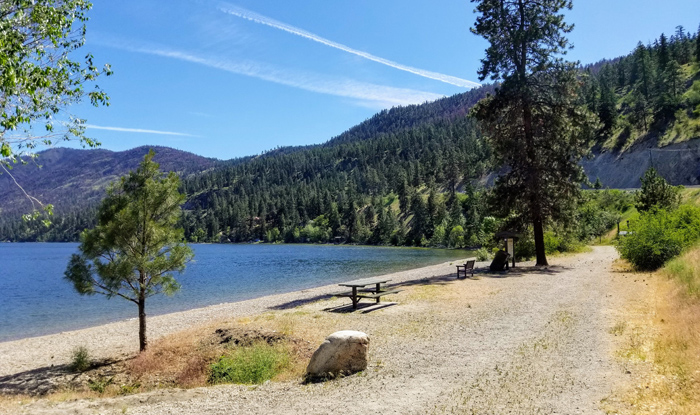 Other Points of Interest Along Peachland's Waterfront 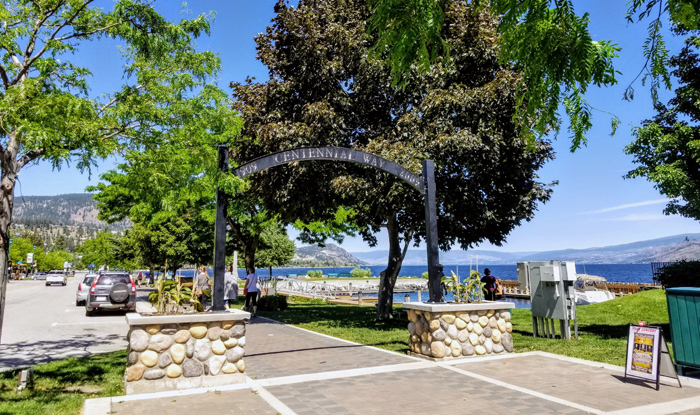 Along the waterfront is Centennial Way, a paved, continuous walkway that stretches 13 blocks, from Heritage Park at 1st Street to 13th Street. Numerous Peachland residents and visitors use this walkway for their daily walks and to access downtown businesses and amenities. 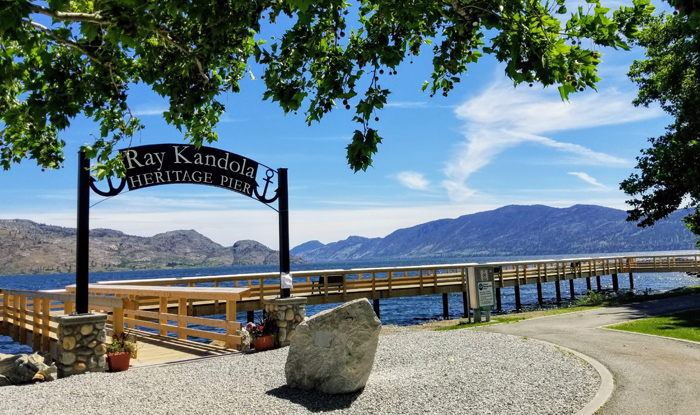 A recent initiative of the Rotary Club of Peachland, the Peachland Lions Club and the Peachland Sportsmen's Association, the Ray Kandola Heritage Pier is a beautifully-constructed, wheelchair accessible pier in downtown Peachland, allowing for excellent access to the lake for fishing and enjoying the spectacular views.

WitBit Water Park is a huge, inflatable water park for ages 5 and up that is typically open from early July to early September. Admission is $25 for an all-day pass, $15 for an evening pass, or $99 for a 5-day pass that allows you to come and go at-will. For more information and to purchase admission, visit okanaganwibit.com/peachland-wibit

If you would like more information on living in Peachland or are ready to take the next step in your search for a home in Peachland, Jeff Creamer can help you navigate the Peachland real estate market. Contact him directly at jeff@shopkelownahomes.com or 250-575-7112, or click here to view Peachland's latest MLS listings.